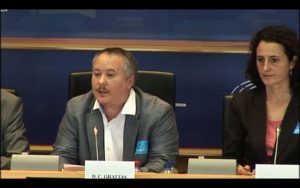 In an historical first this afternoon, the European Parliament heard from an intersex person on the rights and needs of intersex people across Europe.

Intersex people are born with bodies that do not entirely match the definition of either the male or female gender.

During a public hearing on the situation of fundamental rights in the European Union in 2015, Dan Christian Ghattas, explained the situation of intersex people in Europe. To the video recording: [http://www.europarl.europa.eu/news/en/news-room/20160607IPR31014/Committee-on-Civil-Liberties-Justice-and-Home-Affairs-16062016-(PM)] (Speech by Dan Christian Ghattas begins at 2:09:20)

“It is estimated that around 1 in 200 people are born intersex,” Ghattas explained, “and they are usually subjected to surgery and hormone treatment within the first two years of their lives in order to fulfil societal expectations about gender.”

“This treatment of infants means that we do not get the opportunity to make choices about our own bodies. Most intersex people experience psychological trauma as a result.

“This is a violation of our right to self-determination, and contravenes the EU Charter of Fundamental Rights and the European Convention on Human Rights.

Vice President of the European Parliament’s LGBTI Intergroup, Malin Björk, commented: “LGBTIQ people face a constant political battle for the right to exist. Gender norms around how male and female bodies should look lead to a violation of the right to bodily integrity of intersex people.”

“This is a form of violence and we have a responsibility to fight against in our struggle for justice. Therefore, the presence of an intersex organisation in the European Parliament in a hearing on fundamental rights is politically important, and something I value and celebrate.”

Ghattas appeared in the Parliament this afternoon with the support of the European United Left / Nordic Green Left (GUE/NGL<http://www.guengl.eu/>), the Organisation Intersex International Europe, and the International Lesbian, Gay, Bisexual, Trans and Intersex Association (ILGA<http://ilga.org/>).

You can read the speech by Dan Christian Ghattas here: [PDF]